A BRAZILIAN PLAY AT THE FOREFRONT OF THE INCLUSION MOVEMENT

The young Brazilian Tathiana Piancastelli has always dreamed about becoming an actress and her wish finally came true in a play that she created to occupy the center  stage. “Menina dos Meus Olhos” or “Apple Of My Eye” tells the story of Bella, a teenager with Down Syndrome, like herself, who faces prejudice and disdain while searching for social acceptance and a happy marriage.

According to the director, Debora Balardini, who runs a theatre company in New York city and embraced the innovative project with a cast of 10  actors, “Apple of My Eye” stands out for being the first professional theatrical play written and performed by an artist with Down Syndrome.

“Apple of my Eye” explores the themes of romantic love, community and “belonging” through the use of multimedia, physical expression and text.  While short videos on the background provide the scenery, the acting emphasizes body language and movement in a script with brief, and yet strong, speeches in Portuguese – for the American audience there are subtitles in English.

“Apple of My Eye” was performed  for  the first time in New York, in 2013, and the feedback was so positive that, two years later, the cast is together again and getting ready to participate in the International  Hispanic Theatre of  Miami, that takes place in mid-July.  A dress rehearsal opened to the public had just happened in a cultural venue in midtown Manhattan.

The next destination after Miami is London, where “Apple of My Eye” will be showcased at the renowned Langdon Down Centre, as a part of the International Down Syndrome Day celebrations, on March 21st, 2016. The building has historical relevance for being the former residence of  Dr. John Langdon Down, who discovered the genetic disorder, and for hosting an outstanding Victorian theatre devoted to artistic performances like “Apple of my Eye”.

With the growing exposure, “Apple of My Eye” is becoming an important element of the campaign for the social inclusion of people with disabilities. After all, not only the story, but the production itself, brings  the powerful message that our differences can transcend our expectations of what qualifies as “normal”.

“Apple of My Eye” 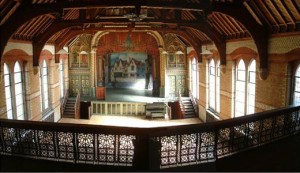 Normansfield Theater at the Langdon Down Centre