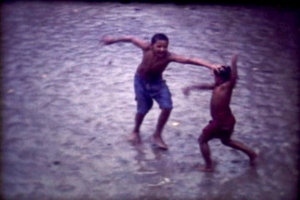 The Brazilian art gallery Nara Roesler has just inaugurated a space in Chelsea  and will present Cao Guimarae’s  first solo exhibition in New York City. The gallery show, which opens to the public on March 31st, is a video installation with eight rarely seen films by the Brazilian contemporary filmmaker on the theme of adulthood. The artist has a point. Through these films, he conveys that adulthood does not exist, being a time in life full of memories of what has passed and expectations of what is to come. In his view, childhood and old age are free from these obsessions and the film selection captures both periods of a person’s life.  While the films “Da Janela do Meu Quarto” (From the Window of My Room) and “Peiote” depict childhood as a time in life when all futures are possible, “Reza” (Pray) and ”Lero Lero” (Chit Chat) focus on the elderly, on the present moments of their lives that they still enjoy.

The exhibition is curated by Moacir dos Anjos and organized in conjunction with Cinema Tropical, a non-profit organization based in New York dedicated to the programming, promotion and distribution of Latin American cinema in the United States. In conjunction with the exhibition, there will be a book launch and screening of Cao’s most recent feature film, “The Man of the Crowd” (2013).