The Jewish Museum has just opened, on May 6th, a major exhibition about Roberto Burle Marx, the architect and landscape designer who became one of the most celebrated figures of the Brazilian modernism. Differently from previous shows, this one emphasizes Burle Marx’s multidisciplinary talent, going beyond showing his famous landscape designs and gardens, to also disclose the diversity of his practice – paintings, sculptures, set designs, jewelry and tapestries.  As a result, “Roberto Burle Marx: Brazilian Modernist” is likely to break ground for shedding new light on his figure as an artist. A major exhibition highlight is a nearly 90 foot long wool tapestry created by the artist for the Santo André Civic Center.

Burle Marx was born in São Paulo, in 1909, the son of a German Jewish father and a Brazilian mother of French descent. Even though he spent most of his childhood in Rio de Janeiro, he moved to Germany in the 1920s and was profoundly impacted by a visit to the Berlin Botanical Gardens, where he found Brazilian plants and flowers that were often overlooked back at home. When he returned to Brazil, he had painting classes with renowned artist Candido Portinari and later in his life, acquired a property in  Guaratiba (Rio de Janeiro) an “ecological sanctuary” where he studied and collected native species from places such as the Northeastern Sertão and the Amazon. Across his entire life, he designed more than 2,000 gardens and identified more than forty unknown plant species.

At the Jewish Museum one can see Burle Marx’s unique aesthetics, present in the variety of media he worked with. The show also includes works by contemporary artists who have been inspired by him, such as Nick Mauss, Dominique Gonzalez-Foerster, Juan Araujo and Luisa Lambri.  Beatriz Milhazes has been commissioned to create a new work for the Museum – Gamboa II, a vibrant installation on view at the lobby. The annex room replicates Burle Marx’s dining-room at his Guaratiba property (the Sítio) where one more of his talents is revealed: the artist was a brilliant cook and frequently invited friends over for memorable banquets with table cloths designed by him.

SOME WORKS ON VIEW 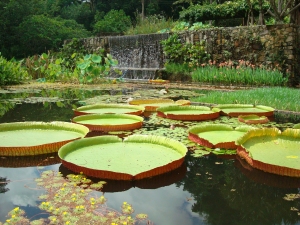 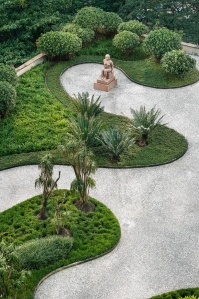 Roberto Burle Marx painting a tablecloth in the loggia of his home, 1980s; the azulejo tile walls and chandelier composed of fruit and flowers on a metal armature are his work. Photograph © Tyba. 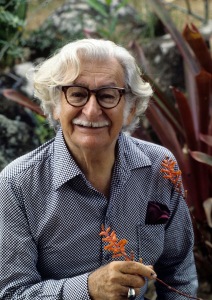 Tatiane Rosa Schilaro is a Brazilian writer and curator who lives in-between New York and California. She has an MA in Contemporary Art History, an MFA in Art Criticism and Writing from SVA-NY and she’s a PhD Student in Visual Studies at UC Santa Cruz, CA.