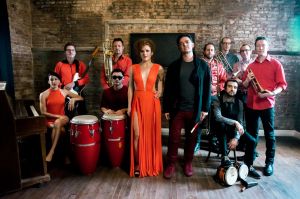 Symphony Space will present in the coming weeks a new music event series, LatiNew, dedicated to bridging the cultural gap separating Latin and Brazilian music genres. The idea behind the project is to take advantage of NYC’s local talents by bringing to the public great Latin and Brazilian artists based in the city. Each concert will be preceded by a complimentary happy hour and followed by a DJ party at Bar Thalia.

The Williamsburg Salsa Orchestra is a full band that resets the boundaries of the genre, taking the typical salsa form and infusing it with a comp letely modern identity. Led by New York’s percussionist and arranger Gianni Mano, the band features an Argentine chanteuse, Solange Prat. More at www.wsoband.com

Born in the U.S. and raised in Brazil, Alexia Bomtempo’s work has been praised by such legends as Caetano Veloso. She just released her fourth album, fully exploring the Northern half of her musical roots. Alexia relocated to New York City four years ago, and she will be presenting classic MPB songs as well as her own work. www.alexiabomtempo.com